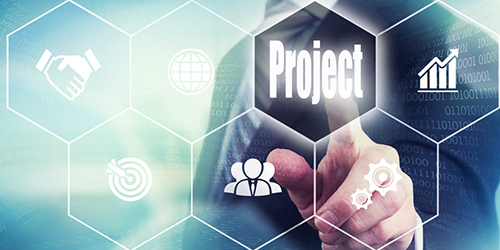 The five process groups as outlined by the Project Management Institute® (PMI®) are initiate, plan, execute, control, and close. The WBS is started with the deliverables of the project initiating and is developed fully as the project work is discovered, defined, and documented in planning. The WBS is the foundation for everything being executed and controlled and is a format for closing all the details of the project.

Where WBS comes from

Project management as we know it today started with charts Henry Gantt drew in 1917 for the delivery of materials for ship construction, and today it’s still the preferred method for scheduling project tasks.

The Charts were the main tool used to plan and schedule projects for decades until 1956 when the Navy began a project to develop a new submarine missile, the Polaris Missile. This was a large project with many unknown elements and the Gantt Charts weren’t a useful tool to organize the numerous tasks. At this point, the Program Evaluation and Review Technique (PERT) was developed and rapidly became the preferred way to schedule tasks for the project.

While PERT proved useful to schedule the project tasks, there was still no valuable way to define all the tasks that needed to be included in it. It wasn’t until 1962 when the Work Breakdown Structure tool and process first appeared in a Department of Defense Document related to costs in aerospace projects.1 The WBS became a required element of many aerospace projects from that time forward and is still widely used in the aerospace industry as well as every other industry or discipline that plans and executes projects.2 The WBS process truly is a key element in all successful projects.

PMI® was established in 1969 as project management became more widely used outside aerospace and  defense.  Since its founding, PMI® has promoted, and vigorously still promotes, the use of the WBS on all projects.

Why the WBS is important

Since its inception, the WBS has become one of the foundational tools for projects. It not only defines project work, it supports the assignment of human capital, and much of the detailed cost estimating, as well as the project schedule.

Key elements of the WBS

On the WBS, work is outlined as work packages. This is the work defined at the lowest level of the work breakdown structure for which cost and duration are estimated and managed. There are more detailed specific project activities within the work packages. These are typically outlined in a WBS Dictionary and/or a project activity list. The WBS Dictionary is a document that provides detailed deliverable, activity, and schedule information about each component in the work breakdown structure. The activity list is a documented tabulation of scheduled activities that shows the activity description, activity identifier, and sufficiently detailed scope of work description so project team members understand what work is to be performed.

About the Instructor: Rob Stone

Rob has experience as a project manager in the civil engineering field, where he managed projects from conception through design to completed construction. His projects included road and highway construction projects, site development projects for large buildings to include hospitals, and subdivision design and construction. He has taught workshops and seminars on project management throughout the United States and Europe and has worked in Africa, Australia, and China.